Blackheads are pretty easy to spot. They’re those pimples at the surface of the skin that appear black because as open comedones  – they turn that colour due to oxidisation when exposed to air. There are a different kind of black dots that can pop up on your skin though, commonly mistaken as blackheads. They’re called sebaceous filaments!

Our skin is covered in hair – everyone has some peach fuzz on your face. Every single hair follicle contains that tiny little hair and a sebaceous gland that produces sebum (oil) that’s meant to keep your skin naturally moisturised.

This is where sebaceous filaments step in: Comprised of triglycerides, waxy esters and squalene. Sebaceous filaments reside in the lining of your pores, and their primary function is to channel the flow of sebum along that lining into the skin to moisturise it.

For many people, sebaceous filaments will never become super noticeable – these filaments only become visible when the lining of your pore fills up with sebum. But for others with oily skin or enlarged pores, sebaceous filaments can be more visible like blackheads, but more of a light grey or tan, rather than black. Some people have quite a thick waxy sebum, which makes them appear like blackheads. This can occur if your sebum is of low quality (diet, environmental factors and dehydration can affect it) 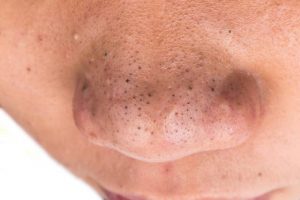 How are sebaceous filaments and blackheads different?

Sebaceous filaments and blackheads can look very similar, but they work very differently.  Sebaceous filaments exist to help oil flow seamlessly to the skin, without pore-clogging back ups. On the flip side, when too much sebum is produced, and mixes with dead skin cells, dirt and bacteria, this clogs the pores and can lead to the formation of a blackhead.

So why do sebaceous filaments pop up on my T-zone?

Because sebaceous glands are highly concentrated around your nose and forehead, sebaceous filaments are more robust in those areas, too. You can extract these tiny grey specks, but just know that this won’t eradicate them, they will naturally fill back up within 30 days because they are a part of your pore structure. What you can do: Adopt a regular regimen of cleansing and exfoliating to keep pores clean and clear of excess sebum and debris.

How can I treat blackheads and/or sebaceous filaments?

The best way is to use an exfoliating face wash or treatment that clears out clogged pores. DMK’s ACU cleanser is great for that reason, it’s able to dive through the oil on your skin to get deep into your pores and clear away all that dirt, bacteria, and dead cells that are clogging them up. Salicylic Acid effectively breaks down the natural sebum that fills up those pores to form sebaceous filaments. Another amazing product is DMK’s Essential Fatty Acid supplement (EFA’S). EFA’s help thin out the oil (sebum) in your skin so it doesn’t get stuck or trapped or stick to dead skin cells and clog your pores, it also makes extractions a lot easier for us and prevents the skin congestion from happening so frequently once it’s treated. The thicker your sebum the more chance for the P-Acne bacteria to come to the surface causing acne & breakouts.

Try your best to resist the urge to pick at or squeeze sebaceous filaments or blackheads as you could exacerbate the problem by spreading bacteria and dirt or, worse yet, cause irritation and permanent scarring. If you simply can’t keep your fingertips off your face, book in with us for facial and extractions so we can give your skin a deep cleanse and professionally extract any actual blackheads from the skin.

Shopping cart
close
Start typing to see products you are looking for.